UWC Sponsors Our School with a Science Lab 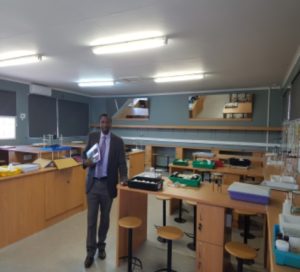 With 1200 grades 8 to 12 learners Richard varha high school has been ranked as one of the top performing schools in the Eastern Cape Province in science.

Under the careful supervision of the school principal Mr.S.Adonis(middle) the science lab will help neighbouring schools with their science practical’s thus this will help bring the schools together and this will guarantee a much higher pass rate for Dimbaza schools and could increase the pass rate of Grade 12’s in the Eastern Cape province.

With the presence of MEC for Education Mr. Mandla  Makupula a plaque was put in the science lab.

Learners from the school performed a traditional dance in celebration of Richard varha high school succeed in academics and other extra mural activities, which the school participates in, the school choir also welcomed the guests with a beautiful melody/song in which kick started the event/ceremony on a soothing note.